The Fifes and Drums 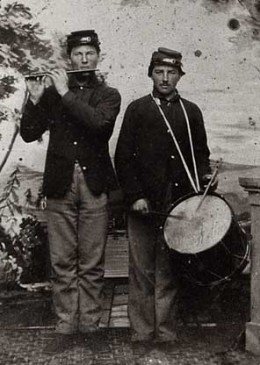 Fifes and drums have been used together for martial duties since the 14th century. It was not until the American Revolution that fife and drum bands were widely organized and used by both sides for field calls and entertainment. Fifes and drums grew to be military necessities during the time between the Revolution and the Civil War. With the firing on Fort Sumter and the start of the Civil War, the mass raising of regiments also called for the need to recruit large numbers of musicians. Schools of instruction were begun on Bedloe’s and Governors Islands in New York Harbor for field musicians of the Army of the Potomac. The training was rigorous, as each fifer and drummer was required to know and perform the numerous duties and calls from memory.

Drums
The Drums used by musicians of the Civil War were rope tension, unlike the modern rod tension. They were also larger and deeper, which allowed more of a roar which could be heard over large distances and over tremendous noise- perfect for a battlefield. Standard field drums were 16″ in diameter, and 12″ in depth. The heads were calfskin, and the snares were animal gut. The shells were made of ash, and were usually painted to signify the branch of service- blue for infantry, red for artillery, etc., and sometimes decorated with a patriotic eagle. The counterhoops were painted crimson red.

Fifes
The fifes were six holed, and tuned to B flat. They were usually wood- rosewood or cocobolo being most common, but some metal fifes were used as well. Fifes have a capacity of playing three octaves, but were generally played in the 2nd and 3rd, though the music was written in the first and second octaves.

Jersey Blue
The Third New Jersey Volunteer Infantry is proud to announce the release of their new CD, “JERSEY BLUE” – A collection of Martial Airs and Camp Tunes from the Civil War, performed by the 3rd New Jersey Fifes, Drums and Bugle.

regimental-fifes-and-drums
Please click on the titles below to hear a sample of the music!

Other selections include:
Kingdom Coming, The Rose of Alabama, Tramp Tramp Tramp, Governor’s Island Quickstep, Marching Through Georgia & many, more!.
If you are interested in purchasing the CD, please enclose a check for $17.95 ($15.00+$2.95 postage & handling) payable to: The Third New Jersey Volunteer Infantry. Mail check and order form to: