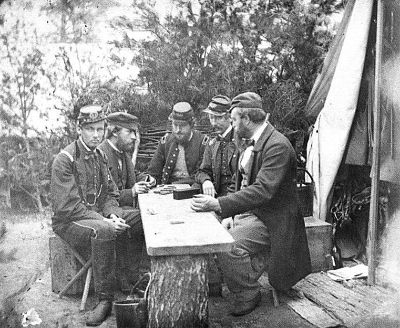 Hurling appropriate epithets at some miscreant (like the guy who has to get up in the middle of the night to relieve himself, and thus, disrupts the slumber, not to mention the warm air pocket of his pards “spooning” in their “roomy” tents). Acceptable (not in the presence of the ladies, if you don’t mind) fightin’ words include: You S.O.B!” “I’ll knock the shit out of you!” and “I’ll kick your arse!”

Improve your impression and avoid obviously modern phrases and sayings. Instead, learn a bit of the language of the Civil War soldier. Try pepper your camp talk with these terms.

No definition is needed for most of these words- they mean the same then as now.

Woe unto to the unwary soldier who fell victim to the entreaties of the camp card shark on pay day! Popular card games were known as draw poker (“bluff”) and 21. Dice games were also played.

Soldiers with access to paint might also decorate their ground covers with chess, checkers, and a game called “chuck-a-luck”. (I’m still trying to figure out what that’s all about). Drinking was ever popular. Whiskey, gin, brandy, wine, and beer were consumed. When ready made alcohol was unavailable, the soldiers made their own home brew which they such colorful names as “tanglefoot”, “Oh be joyful” and “knock ’em stiff”. Bartering was common. Anything and everything was available for trade: tobacco, coffee, canteens, pocket knives, sugar, sardines, soap, whiskey, and playing cards. Postage stamps also served as a medium of exchange.

Many soldiers were voracious readers of anything they could get their hands on: New Testaments, pocket Bibles, religious tacts and hymnals were found in many haversacks. Newspapers from home made the rounds. Sometimes a soldier would read aloud a letter he received from home. Remember: early war volunteer companies were almost always recruited from the same town or countryside. These men knew each other’s families and craved any news from home. Frequently, boxes from home might also include reading material such as “dime novels” (paperbacks) with catchy titles like “The Indian Wife of the White Hunter”. Popular writers of the time included James Fenimore Cooper, Charles Dickens, Victor Hugo, Herman Melville, Edgar Allan Poe, Sir Walter Scott, Shakespeare, and among the more educated, Greek Classical writers such as Homer. Some units even established traveling lending libraries. Chaplains sometimes requested donations of books from the homefolks. At some quiet point in the day in camp (or by candlelight at night) enjoy the simple pleasures of reading.

Running, boxing, wrestling and horse racing were time honored “manly” activities. Baseball (called town ball by the New Englanders) was a popular game on both sides of the Mason Dixon Line. The rules that had developed by the 1860’s were very similar to modern baseball, making it an easy sport for all re-enactors to enjoy. See the author for copies of both “baseball” (also called the “New York game”) and “town ball” rules as well as examples of period bats and balls.

Letter writing and keeping a diary or a journal. The vast majority of Civil War soldiers were literate. They filled their time with making entries in their diaries or journals or in writing letters to loved ones at home. Alexander Graham Bell is going to invent the telephone only a little more than a decade after the Civil War ended. Use your spare time at an event to -dare I say it – write a letter to your wife and family about your experiences away from home.