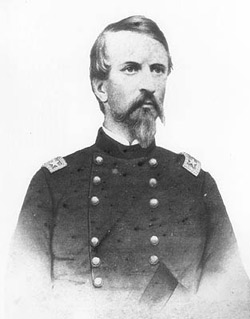 Philip Kearny was born on June 1, 1815 in a mansion on Broadway in New York City. He was born with the proverbial silver spoon in his mouth.
His privileged status afforded him the best education, part of which was at Highland Academy. This school was located across the river from WestPoint. This influence, coupled with his Uncle Stephen, who was an officerin the First Dragoons, led Kearny to seek acceptance to West Point.Kearny’s father, however, insisted that he attend Columbia College,and follow his father into the brokerage business.

After some dismal years clerking in a law office, Kearny’s luck changed. His grandfather died, leaving him a fortune. Kearny promptly secured a commission in his uncle’s cavalry unit, with the help of the famous Winfield Scott.

In 1839 Kearny was sent to study tactics at the French equivalent to West Point. True to form, he as soon riding into his first combat experience with the French Chausseurs d’Afrique in Algeria. The French would dub him “Kearny le Magnifique” and pin the Legion of Honor to his lapel. Kearny returned to the United States and the boredom of the peacetime military. Although appointed as the aide to the overall commander, Winfield Scott, Kearny was still bored. He lamented, “Am I to spend my military career as a highly placed flunky looking to floral decorations in banquet rooms, escorting visiting bores and dancing with the ugly wives and the clumsy daughters of foreign diplomats?”

In 1842, Kearny was married and later, reassigned to Fort Leavenworth, Kansas. Still, he chaffed at his inactivity. Finally, in 1846, he resigned his commission. This was just before the outbreak of the hostilities with Mexico.

Not only did he win reinstatement, Scott got him a promotion to captain. At Churubusco, Kearny led a cavalry charge in the old “Chausseur” style. The Mexicans fled before him until they regrouped by the gates or the city. A sharp firefight ensued which degenerated into hand to hand fighting. The American cavalry, well in advance, were outnumbered. It was clear that escape was the only way out of the trap. Before he could get clear of the area, Kearny was hit in the left arm by a piece of grape shot. Although losing him arm, he won a brevet to Major by his actions.

The war ended and Kearny again became bored with the army and miffed by the slow rate of promotion. His marriage failed and he resigned his commission in 1851.

Kearny then returned to Paris and promptly fell in love with a New York City girl he met there named Agnes Maxwell. Marriage with his new found love was not to be as his wife would not grant a divorce. Eventually, Kearny would injure himself in a riding accident, and the sympathetic Agnes would move in to take care of him. Imagine the shock of Victorian New York society! Kearny and Agnes lived in “Bellgrove” (his estate in Newark), until 1858 when his wife finally granted a divorce. Then he and Agnes moved to Paris, and were married. The following year, he saw action at the battle of Solferino. Although the “one armed devil” was only a foreign observer with Napoleon III’s troops, he was seen on horseback, sword in his hand and reins clenched in his teeth, leading a French cavalry charge! In 1861, he and Agnes had a child, Archibald. However, they were soon to learn that Civil War had broken out at home.

Kearny had always affiliated himself with the South, due to his upbringing, but he was a staunch Union man and an abolitionist to boot. No doubt which side he would support! To his horror, though, all the good commissions were snapped before he could get to Washington. In addition, the War Department felt his disability made him unfit for service.

Even the State Government of New York turned him down. It wasn’t until the disaster at Bull Run that New Jersey recognized the need for experienced officers and gave him the command of the Jersey Brigade.

Kearny met the Jerseymen in their camp at Alexandria, Virginia. There, he saw an unkempt, and rowdy bunch of volunteer soldiers. It wasn’t long before all that changed. They soon became one of the best drilled brigades in the Union Army. Once again, Kearny chaffed at his inactivity. He was also harboring a contempt for the inactive commander, George B. McClellan. His mood worsened with the death of his son in 1862.

Kearny and his Jersey Brigade were the first to enter Manassas Junction where Johnston’s army fell back in March of 1862. McClellan was so impressed by Kearny that he offered him a division command. Kearny, unwilling to leave his beloved Jerseymen, initially declined. The news was greeted with wild cheers when the men of the Jersey Brigade found out.

However, McClellan persisted and Kearny took command of the 3rd Division of the III Corps. His first fight was at Williamsburg, Virginia. He displayed his “lead from the front” style and his division performed well.
Later, at Seven Pines, the rebels found the III and IV Corps separated from the Army by the rain swollen Chickamony river. During this action, one of his colonels, asked where to send his regiment. Kearny replied, “Oh, go in anywhere Colonel, go in anywhere. You’ll find lovely fighting all along the line.”

Displaying the compassion for his men, Kearny later wrote, “…War is horrible because it strangles youth” He also showed his compassionate side during a visit to console Oliver O. Howard who had lost his right arm at Seven Pines. Howard was said to have quipped, “There is one thing we can do, General. We can buy our gloves together.”

During the inactivity that followed, Kearny developed the famous “Kearny Patch” so he could recognize his men in battle. It also built their morale by inspiring an esprit de corps. The men were devoted to Kearny because he looked after them in such minute detail. He also looked after himself. His headquaters was awash in fine food and imported luxurious carpet!
After Gainers Mills in June, McClellan order a “change of base”. Kearny had had enough. He blasted McClellan with such strong language that he could have been court martialled.

Four days later, Lee struck at the crossroads at Glendale. Kearny held the right of the Union line. When his lone was bent back and seemed ready to break, Kearny’s old brigade of Jerseymen came at the double quick to retake a battery and stem the tide. Kearny himself was nearly captured in the action.

After Malvern Hill, McClellan again ordered a retreat. Kearny told his staff, “I, Philip Kearny, an old soldier, enter my solemn protest against this order for retreat. We ought instead of retreating should follow up the enemy and take Richmond. And in full view of all responsible for such declaration, I say to you all, such an order can only be prompted by cowardice or treason. Perhaps these strong words helped Lincoln in his decision to sack McClellan.

Now under General John Pope, Kearny and his men again displayed their tenacity in battle during the attack on the railroad cut at Second Manassas.

Kearny also showed his skill on the defensive while covering the disastrous retreat. He bitterly told the Brigadier General Gibbon, “I suppose you appreciate the condition of affairs here, sir! It’s another Bull Run, sir, it’s another Bull Run!” When Gibbon replied that it was not that bad, Kearny roared, “Perhaps not, Reno is keeping up the fight. He is not stampeded. You are not stampeded. That is about all sir, my God, that’s about all!”

On September 1, during the retreat, Kearny sent a brigade to the aide of General Stevens who was holding off the Rebels near Chantilly. It was a sharp fight, in a blinding thunderstorm, and Kearny was seen in his familiar guise of sword in one hand and reins in his teeth.
That evening he rode out to see about a gap in the Union lines and rode straight into a line of rebel infantry instead. His reckless soul would not allow him to surrender. As he raced from the scene, riding low on his horse, a bullet from a rebel volley struck him ingloriously in his rear, traveled through his intestines, and lodged just under his heart. He fell from his saddle, kicked once, and was dead.
A.P. Hill, an old acquaintance, saw Kearny’s body and said, “Poor Kearny! He deserved a better death than that!” Indeed he did. Kearny is now buried at Arlington National Cemetery where a beautifully restored statue of him now stands. If you ever get there, it’s worth a look.