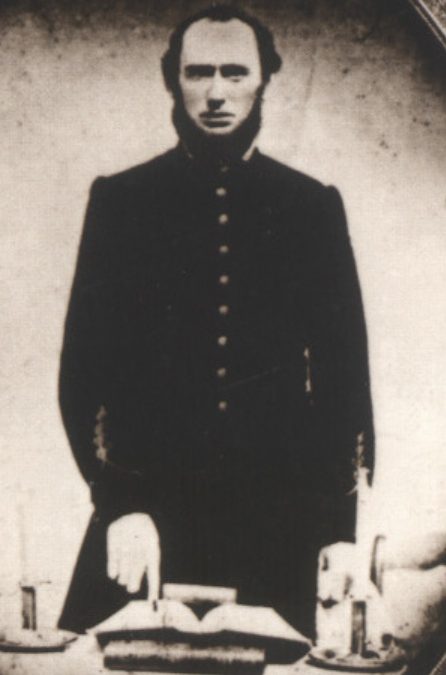 With no precedent or established guidelines regulating specific duties, chaplains relied on their own past experience. They attempted to provide ministerial leadership to the regiments as though they were congregations in uniform.

From this beginning, the real onset of military chaplaincy emerged as each chaplain sensed the needs of the troops and responded accordingly. Therefore as best he could, the chaplain met the needs of the soldiers, both temporal and spiritually. It was during the Civil War when the term chaplain was first commonly used. The role was generally viewed as that of a clergyman performing spiritual work in a military context to which he was closely related. he strove to arouse the soldier’s determination to fight valiantly while maintaining good personal character.

Specifically, the chaplain conducted worship services and prayer meetings at least once each week, administered the sacraments before baptisms and wedding ceremonies, comforted the sick and wounded, and buried the dead.

The multitude of tasks most chaplains undertook were over and above those associated woth the ministry. They helped remove the wounded from the field of battle, drove ambulances, acted as postmaster, and correspondent to hometown newspapers whereby he made known the needs of the men and made an appeal for provisions. Some acted as bankers, persuading the men to save their money and send it home to wives and parents. Some armed themselves and fought with the men, while there were conscientious objectors and were assigned non-combatant duties.
To delve a little deeper into the Civil War chaplaincy, as recorded in the history of the US Army chaplaincy, and personal diaries of the chaplains who served, lets begin with the most conspicuous function of the chaplain.

From the very beginning, the conduct of public worship became the chief means of fulfilling his day. Most chaplains endeavored to conduct at least one service each week, on Sunday iif at all possible. However, when regiments were on reconnaissance, or in combat, services were held erratically.

In balmy weather, outdoor assemblies were common. If the regiment was on the move, services would be held in the evening around a campfire. In contrast, during weather encampments when military operations were less active, the soldiers built wooden chapels.
When McClellan wired the Secretary of War in 1861, for boards to build chapels, the Secretary replied, “The Lord’s will be done”. Sometimes large tents would be provided from both, home congregations and soldiers. These “tabernacle tents” provided protection from the sun, rain, and cold.

Wherever and whenever services were held, it was sometimes interrupted by a surprise attacker hasty preparation for battle. Chaplain John Adams experienced such when assembly was sounded just when he announced his subject- “within a minute, not a soldier was in the chapel.” Chaplain John H. Stuckenberg, of the 145th P.A. Infantry, in his diary, recorded the following: “I was requested bu the Major of the 64th N.Y. to hold services in his regiment. I did so immediately after leaving our dead. The men were behind were behind their breastworks, I stood in front of them. Brisk skirmishing was going on all the time, and rebels as well as our own men could be seen running and firing. A rebel flag was also seen at the edge of the woods.

Worship at such a place, at such a time, with fearful scenes just enacted and being enacted, was very solemn. I thanked God we had been spared, prayed for the many wounded and remembered the relatives of and friends of the killed.”
There were occasions when weekly services could not be held. When weeks would pass by without any opportunity to hold a regular service, chaplains would, at night, go from tent to tent and offer spiritual guidance to the soldiers. In the thick of battle, without thought for personal safety, they would attempt to bring comfort to the wounded and dying.

Whatever the circumstances, the chaplain ministered to all, cowards and heroes, sinners or saints, generals or privates, individually or congregated together. He was there to “uphold the spiritual values within the army”.

Most good chaplains felt the need to attend to aspects of the soldiers life other than religious devotion. Each time the chaplain performed chores unrelated to the clerical state, he became more closely associated to every man in the regiment.

In many instances, military clergymen were judged more by their servitude activities than traditional worship service. Some hard working fighting men tended to scorn chaplains who did nothing but contribute hymns, prayer, and sermons. They seemed to be drawn closer to those who labored diligently at extra duties.

A chaplain soon discovered that when he undertook activities which eased the minds and bodies of the troops, he had a great opportunity to influence them spiritually.

There were times when the soldiers went for months without pay, and then suddenly they saw a large lump sum of money. On that occasion, the chaplain would persuade them not to gamble or squander, but to send it home to wives and parents.

Many a soldier would follow his advice. Trusting the chaplain, they would hand them their pay with the request to get it to their families. When conditions permitted, he would ride to the nearest Adams Express Office, and send the money to its destination. For this performance he became known as the regimental banker.

Sometimes the chaplain would secure a leave of absence and deliver the money personally. On one such occasion, Chaplain William Stevens carried $65,000 to Washington. When he arrived, he sent $20,000 to families west of the Alleghanies and personally delivered the rest.
There is a story about an officer who was going into battle at Chickamauga who feared he would be killed. He asked the chaplain John Trecy to take care of his purse.

Hours later, he found Tracey ministering to the wounded in the front lines, with bullets flying all around him. The captain asked him what he was doing up there, and the chaplain replied, “Why, my duty of course.” The captain then asked for his purse because it would be safer with him!

When one of Sherman’s supply trains could not start for lack of an officer to take charge of the guard, BF Christy, a Catholic Chaplain, buckled on a sword, offered his services, and took the train through. He was later asked what he would have done if attacked, he simply said, “Why, I would have asked the boys to pitch in!”

These stories illustrate that the chaplain could be found most any place where he though he could provide helpful service. A few even acted as defense counselors in court-martials; as recruiters and escort officers. One chaplain was commended for being a good wagon master.

Early Legisltaion did not provide specific duties for chaplains other than that President Lincoln wanted chaplaincy services available to the army and thus federal law provided for a religious ministry.