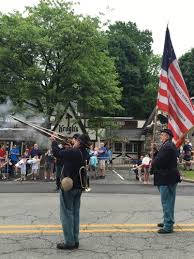 This is a report from Captain James V. Pepe when we participated in a parade and living history at Picatnney Arsenal on Thursday, May 13th.

The Picatinney Arsenal event was held on Thursday, May 13th to celebrate Armed Forces Day at the Arsenal. It was only open to Arsenal personnel and those who were invited to march in the parade. I arrived around 9:00 A.M., found our location and where to park my wagon. The boys were already set up and had things well in hand. There were only six soldiers there from Company A to represent the Regiment. They were Captain Jim Pepe, Privates Barry Clark, Jack DeMetro, Frosty Lawson, John St. Peter and Ray Wichowski. The day was sunny and hot but the boys didn’t seem to mind. At about 11:00 A.M. we formed up and marched to our pre-designated spot for the parade. Private Lawson left us to perform his “Light of the World” song for the public. At 12:00 P.M. the parade started to move only to be halted at the jump off spot. There we could hear Private Lawson doing his performance for the arsenal personnel. Our formation was four across, by height, with me in the lead. At 12:20 P.M. the parade started and off we marched. As we neared the reviewing stand Private Lawson fell into line next to me and soon after, opposite the center of the reviewing stand, I ordered the squad to halt I then moved to the right of the squad placing myself perpendicular to the line and gave the orders to fire a volley. The volley was crisp and the boys followed each command with precision. Once the squad was placed at shoulder arms and right shoulder shift I moved back to the lead position and ordered “Forward March” which was conducted with the bugle. As we moved forward the crowd broke into applause and I then gave a sword salute to the reviewing stand. Once back at our site we gave a demonstration of skirmish drill with verbal commands and with the bugle. Upon conclusion the squad was put at rest to eat and to check out the U.S. Army equipment on hand. We departed the arsenal between 3:00 and 3:30 P.M. The boys on this day did the Company and Regiment proud. Next year Armed Forces Day at the arsenal may be held on a Saturday and open to the public once again.