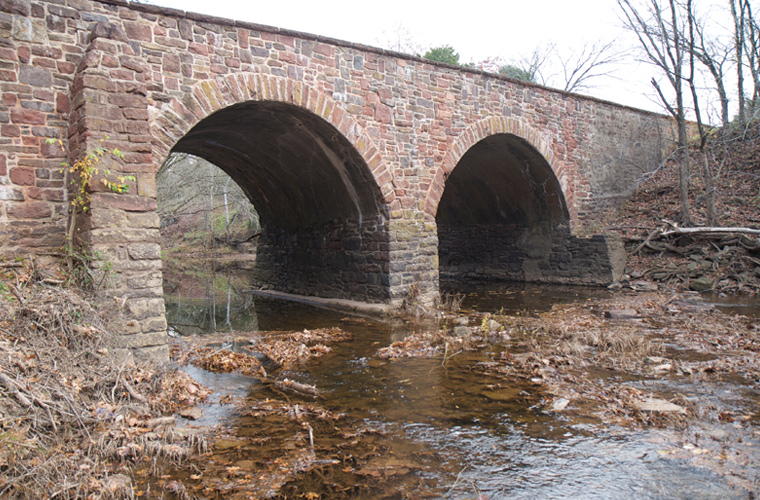 SIR: I have the honor to report that on the morning of the 27th ultimo, about 3 o’clock orders were received to be ready to march immediately, and this regiment, which was then encamped at the foot of the hill near the Seminary, marched at daybreak to the railroad depot near Fort Ellsworth, where it was placed on the cars with the other regiments of the brigade, and the train moved off immediately. About 9a.m. of the same day we came to a point on the Orange and Alexandria Railroad about a quarter of a mile this side (east) of Bull Run Bridge, where we found the road obstructed by the débris of cars from a collision the night before. The regiment left the cars and moved up the railroad, crossing Bull Run Bridge, when I filed to the left of the road and formed it by column of division on the high ground to the left of the track. Here I was ordered to relieve the men of tents, blankets, haversacks, &c., and they were consequently thrown upon the ground.

From a little previous to 10 o’clock a. m. cannonading was heard on the front, and from the point we now occupied skirmishers were observed to our front and left. I now received orders to follow the Second Regiment, and the line of march was obliquely to the right across the railroad, and after a march of about 1 1/2 miles, through a rough but open country, we came to a dwelling house and the marks of an old camp, when suddenly the enemy opened on our right and left flanks with artillery at short range. A battalion of cavalry now showed itself on our left, when I formed my regiment in double column at half distance, and was ordered to take my position 200 or 300 yards to the rear and opposite the interval between the First and Second Regiments, which were in line of battle. Thus formed the brigade moved, the First toward the guns on the right, the Second toward those on the left, the Third moving opposite the interval as previously ordered for a mile or thereabouts, when I was ordered to halt and deploy, the enemy’s cavalry having now moved to the rear of his right. Almost immediately skirmishing was heard in front. Shortly after the leading regiments fell back on my line in good order, and the enemy’s cavalry again appeared on our left, when I again prepared to receive them, and retreated in column by order of the general across an open country to an elevated position on the railroad, and there formed line of battle behind some trees and ranks of wood. When the First and Second Regiments had passed I continued the retreat toward Bull Run Bridge, sometimes threatened by cavalry, when I formed column; sometimes by artillery, who fired grape through my ranks, men and officers behaving admirably and moving in perfect order.

We now came to a ravine, the declivity of which was so steep that many of the men fell in descending, and in ascending the opposite side we received a destructive fire from the enemy’s artillery at short range. Fatigue of incessant marching over bad roads and continuous fire of the enemy had thinned my ranks, and many men had fallen out, unable to march. The retreat being continued across the bridge, these stragglers were captured by the enemy.

I was then placed with a part of my regiment on a hill to the left of the road to protect the bridge, the other portion having moved down the railroad. Here I was re-enforced by the Twelfth Ohio, the Eleventh Ohio being somewhere to my left and rear. General Taylor was now wounded and carried to the rear, and Colonel Scammon, of the Eleventh Ohio, assumed command. The difficulty of the ground prevented the farther pursuit of the enemy’s artillery, but he occupied the rifle pits on the opposite hill and commenced a heavy fire on our troops, which was vigorously replied to and continued nearly an hour.

The enemy now having crossed the creek on our right in force, for the purpose of outflanking us, I was ordered, in concert with the Twelfth Ohio, to fall back along the brow of the hill and opposite the force trying to get in my rear. The bridge being now abandoned, the enemy crossed with his infantry, his cavalry having previously passed by a ford above, and he being now upon our left flank and pressing our front, we retreated slowly and in good order down the railroad, the enemy following about half a mile.
The firing during the engagement was incessant and sometimes very heavy. The casualties so far as known, are comparatively few, the troops having been pretty well screened by the hill on the left of the railroad, covered with dense woods. My chief loss was in prisoners taken by the enemy’s cavalry, who were captured in attempting to cross the bridge. I append the list of killed, wounded, and missing
so far as ascertained.

My officers and men, almost without exception, behaved with the utmost gallantry, and showed the best qualities of soldiers by the quietude and steadiness of their retreat under a galling fire.

I have the honor to be, sir, your most obedient servant,