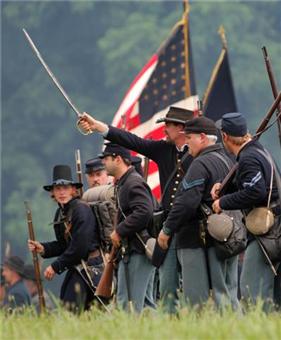 SIR: On Sunday morning, the 14th instant, about 6 o’clock, we left our bivouac, and marched through a pass over the mountains to Jefferson, where we halted in a field by the town for some time. A little before noon we again marched to a point about half a mile to the rear of the village of Burkittsville, where we formed line of battle on the slope of a wooded height, a little on the right of the enemy’s position. After remaining a few minutes, we moved forward into a swampy hollow, and there remained until about 4 o’clock p.m., when we marched by a flank side by side with the First Regiment, followed respectively by the Fourth and Second, keeping as well concealed as the nature of the ground permitted from the fire of the enemy’s artillery, which was strongly posted on a road which leads nearly parallel to the hillside from Burkittsville, and turned suddenly to the left through the gap (artillery was also posted on the steep, rocky, and woody height), until we came directly in front of the enemy’s position, where we halted.

The First and Second Regiments moved forward, forming the first line of the brigade. The Third and Fourth followed to the front at a distance varying from 100 to sometimes only 30 paces in rear, according to the nature of the ground. We moved thus over an open country intersected by high fences, the men clambering over as best they could, and quickly regaining their position in line, marching with great steadiness and precision, and so through a corn-field, still exposed to a hot fire of shell from the enemy, for a distance of one-fourth of a mile. At the verge of the cornfield we were ordered to halt. Here we lost some men from their shell.

Ten minutes after, we were ordered forward, and moved rapidly and steadily across a grass field under cover of a slight rise in front. The men were here ordered to lie down in line. The first line was now hotly engaged, as we could hear from the incessant fusillade intermingled with the roar of the enemy’s guns, now throwing grape and canister as well as shell. In five minutes the Third and Fourth were ordered in to relieve the first line and the men, springing up, went in with a cheer UI) to, over, and through the high fence held by the enemy at the base of the wooded heights and strongly lined by his sharpshooters, who delivered their fire with great rapidity. But nothing could withstand the onset of our men. The enemy broke and fled, pursued by our men with- out halt up the sides of the mountain, climbing up the shingly sides of the hill until they reached the road before mentioned.

Here it was observed that a battalion of the enemy were forming on the right of our line, now become the first line of the brigade, when we changed front forward and delivered a destructive fire on his half-formed ine, followed up by a renewal of the charge, when he broke utterly and the pursuit continued. A party of my regiment, under command of Lieutenant Fairly, my acting adjutant, and Lieutenant Hufty, consisting of about 20 men, moved off from the regiment by my order, and cir- cling round by the road to the right, got in rear of and around the heights up which the body of the regiment was pursuing the retreating foe. They moved with such rapidity that many of the party fell out exhausted, and on their arrival at the point desired in rear the adjutant found he had but 5 men. With these he succeeded in capturing 4 of the enemy’s officers and many of their men. This party, being out of ammunition, was obliged to abandon the pursuit, though they delivered their last remaining tire into the enemy’s artil1er~, now in bill retreat, and which could easily have been captured had there been cavalry to pursue.

Thus ended a sharp and well-contested action, in which the enemy had every advantage of numbers, position, and artillery. In his utter and complete rout, my men showed here what they could do when they had a fair chance, and they here well sustained the honor of New Jersey on this field. I have not to regret the loss of any officer killed. Captain Stickney, of Company F, and Second Lieutenant Lambson, of Company E, are both slightly wounded. My officers and men behaved most gallantly. Those officers who had received their commissions the previous day (all in command of companies) showed by their conduct how well they had deserved their promotion. Lieutenant-Colonel Campbell, of the Fifteenth Regiment New Jersey Volunteers, late captain of Company E, in my regiment, and of the acceptance of whose resignation I have not yet received official notice, was my only acting field officer, and though where all have distinguished themselves it might seem invidious to particularize, I should be acting unjustly did I not mention how nobly he assisted me. I must also mention First Lieut. David Fairly, my acting adjutant, for his promptness in repeating my commands, as well as for his perfect coolness and daring intrepidity. Lieutenant Hufty also behaved remarkably well.

One of my officers captured the colors of the Cobb Legion at the same time with a private, but seeing the man belonged to the Fourth Regiment of our brigade, he gave up his claim to the colors, and gave Colonel Hatch the sling in the evening. Both color-bearers of my regiment, Sergeant Haggerty, of Company A, and Corporal Westcott, of Company B, behaved with distinguished gallantry, waving their colors continually in advance, and I cannot speak too highly of the conduct of Acting Sergeant Dalziel of Company D, who accompanied my acting adjutant with the party detailed and brought down many of the enemy with his unerring rifle.
My entire loss was 11 killed and 28 wounded.

I have the honor to be, very respectfully, your obedient servant,