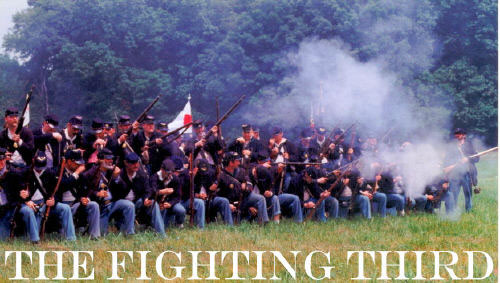 SIR: I have the honor to report the movements of my command since breaking camp near White Oak Church, Va., April 28.
Broke up camp near White Oak Church, Stafford County, Va., April 28, at 2.30 p. m. At 3 o’clock, with 333 rifles, formed with the brigade, and moved toward the Rappahannock River. Arrived to within about three-fourths of a mile of the same at near 8 o’clock, and bivouacked, with orders to be ready to move at 11 o’clock.

April 29, at 5 a.m., received orders to move forward. Arrived at the river, crossed over in pontoons, and by 7 o’clock were in line on the couth bank, where we remained until 5 p. m. Were then moved to the front, to relieve part of the first line (a regiment in Russell’s brigade), and threw out skirmishers.

April 30, at 6 p. in., we were relieved by the Ninety-sixth Pennsylvania Volunteers, and moved back to line in rear of the rifle-pits, on the bank of the river, where we remained until Sunday morning, May 3, when we moved to the left of the front line, in support of a battery. At 11 o’clock, received orders and commenced a movement toward Fredericksburg; passed through that town; then moved in a south westerly direction. Having advanced about 3 miles, fell in with the enemy. Formed line of battle; advanced about 2 miles to a piece of woods, where we met them in considerable force and gave them battle, our engagement lasting about two and a half hours, at a loss on our side of 99 killed, wounded, and missing, including 4 commissioned officers. The colonel commanding the brigade, being close to our colors, was also severely wounded.

Our men fought bravely, and it is useless to attempt to particularize among the officers where all seemed determined to excel. Having expended all our ammunition, we were ordered to retire. Fell back about half a mile, and bivouacked for the night.

Next morning, May 4, at about 7 o’clock, moved out to the left front. Remained until sundown, when, by order, we retired toward Banks’ Ford. Arriving near there, were ordered to the front, in support of the outer pickets, where we remained until 3 a. m. of May 5; then retired over the river, near Banks’ Ford, to the north side. About daylight, marched down the same about 2 miles, and, by order, bivouacked in a woods.

May 7, — Received orders to change camp. At noon moved out about half a mile, and bivouacked until next morning, May 8, when, by order, took up line of march for White Oak Church, where we arrived about 1.30 p. in., and went into camp in front and near old headquarters. 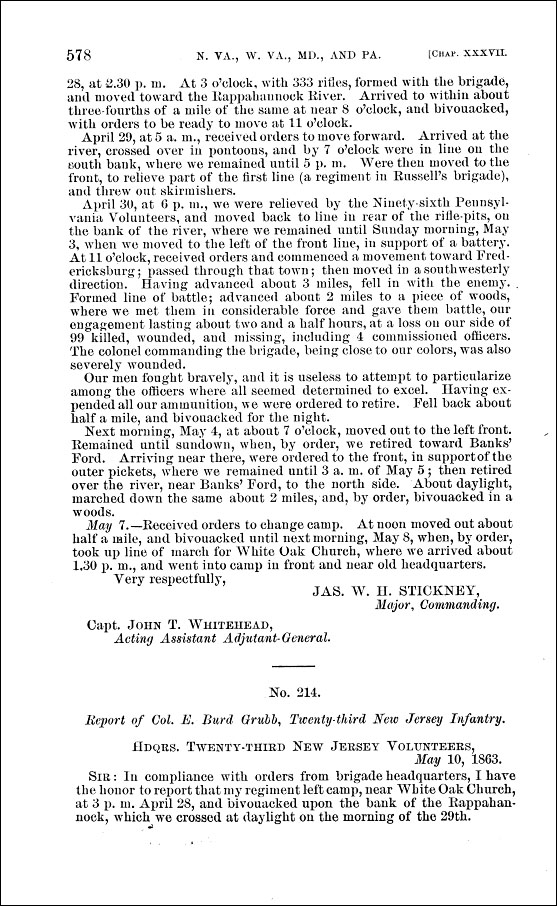