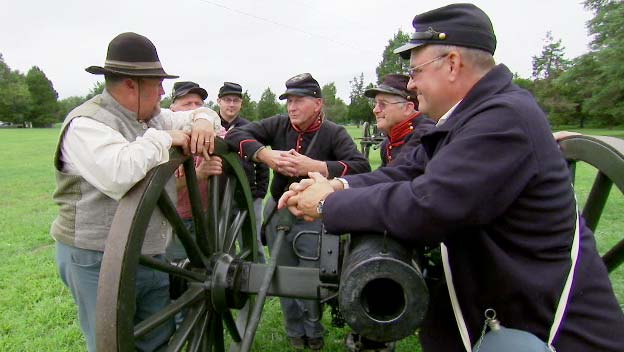 On Monday, February 19th the Regiment attended the Monmouth County Republican Dinner as Honor Guard. As I arrived, the boys were beginning to take up their positions and our music was starting to play. President Lincoln was in the building already receiving guest and I paid my respects to him before I took up my official duties.

It was asked if Preident Lincoln would address the delegates assembled and he accepted. The Regiment would accompany the President as his official guard. After our duties were finished as Honor Guard for the reception we assembled outside the main hall. Major Maske then went to the podium to address the delegates prior to the Presidents entrance. On the Major’s queue Ruffles and Flourishes was played by Bugler Lawson and I announced the entrance of the President to the Chairman. The Regiment escorted the President, with the music playing “Hail to the Chief” to the podium for his remarks. Lieutenants, Cuff and Scaciefaro acted as the his aides. Our lovely and gracious ladies Judi Cox and Nora Kenny were also in attendance as well as the President’s personal body guard, Mr Crook (Alan Lowcher). The President addressed the delegates, which received him warmly, in his quiet and humorous way. After his remarks were concluded the President and the Regiment departed the hall among grateful applause. Once in the great foyer the troops were addressed by Major Maske and reviewed by the President himself. When the review was concluded the Regiment retired to the upstairs for our annual Lincoln ceremony.

Our ceremony began with readings from some of the members assembled. The Dogrobber’s (Bob Wickersty) readings were especially touching and thought provoking as well as the President’s own remarks. During the ceremony we were visited by the Spradly’s (Heath Farm) which made the evening even more special. A Birthday cake was presented to the President along with a gift from the Regiment (a black cashmere scarf). Walter Spradly also addressed the Regiment with some very touching and inspirational remarks. The President then spoke again, but this time not in character, but as Bob Costello. His remarks about President Lincoln were felt very deeply by those in attendance as evident by the quietness of the room and the applause after. To conclude the ceremony Major Maske led the Regiment in the singing of “The Battle Hymn of the Republic”. This, I think was one of the best, if not the best, Lincoln Day ceremonies we ever had.

I would like to thank all the members both civilian and military who attended and to Bob Costello, who added so much to the event as President Lincoln. A very special thanks goes out to Ed Maske who year after year sets up this great event, and through his tireless efforts, gives this Regiment a chance to shine. To me, this event shows what teamwork and friendship is all about in this hobby and in our Regiment. When, on a moments notice, you can bring the military, civilian and music together to give an outstanding display of excellence for all to see. I thank you all and give you all three cheers. JERSEY BLUE!