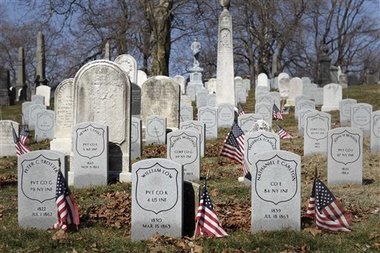 Originally, 1,051 men and officers mustered into the 3rd New Jersey Volunteer Infantry on May 18, 1861 for a 3 year term. So far, I have found the graves of 126 3rd NJ Veterans and documented them with grave stone inscriptions and photographs (about 12% of the unit). My goal is to find 25% – 30% of the total. I have leads on 35 more in NJ, mostly in South Jersey (Burlinton, Salem, and Gloucester counties). I also have leads on about 20 men buried in Brooklyn, Baltimore, Philadelphia, Chester, PA, and Hampton and Culpepper, VA. I began grave hunting back in 1992 while casually strolling through the old Baptist Church cemetery in my former home of Scotch Plains where many Revolutionary War veterans were buried. I happened on the grave of John Mooney, Cpl. of Company I. Mooney died of fever at a US Army hospital on July 27, 1862 and was buried in Philadelphia. Apparently, his family took his remains and reburied them in Scotch Plains. Another buried in Scotch Plains is John Hand, also a Cpl., of Company I, who was killed during a skirmish at Munson’s Hill, VA on August 31, 1861.

Many 3rd NJ men were killed or died of wounds and are buried out of state. The first man killed was John Ellis who was accidentally shot by a sentry and died on July 17, 1861. He is buried in Arlington Nation Cemetery. Thomas Heritage, a private of Company C, is buried in Andersonville, GA (Anyone interested in researching where he was captured?). There is one buried in the National Cemetery at Antietam (Henry Cooklin, private, Co. E.), one in the National Cemetery in Gettysburg (Daniel Schuh, Cpl. Co. H), six in Arlington, six in Fredricksburg, on in Glendale, VA, and five at Cold Harbor.

Through my research, certain trends became evident. Whole companies were mustered in at major cities and county seats such as Newton, Newark, Camden, and Bridgetown. Entire companies usually came from the same county or towns. For example, Co. D originated from the northern part of the state in Sussex, Warren, and Morris counties. Company I came from the central part of the state around Union, Somerset and Hunterdon counties. Company F, which was the color company, came entirely from Salem and Cumberland counties. They were known as the “Cumberland Grays” since they had grey uniforms at the outset of the war. Company A originated also from South Jersey around Mullica Hill and the Gloucester County area. Company K was made up entirely of Union County men. One cemetery, St. Mary’s in Elizabeth, has five veterans of that company who are all Irish immigrants with names like Sheridan, Callahan, McDermott, and McLaughlin.

A few years ago at our Monmouth event, a gentleman approached me whose ancestor was James Sheridan who is buried at St. Mary’s. He later sent me a photograph of Provate Sheridan along with a copy of his discharge paper. Many others from Company K are buried in the Newark area and are all Irish: McGurn, Gavin, Deegan, and McElroy. Graves also found on the regimental level include the Colonel of the 3rd NJ, George W. Taylor, later Brigadier General of the First Jersey Brigade who was mortally wounded at 2nd Bull Run and later died on September 1, 1862- the same day as Phil Kearny. Colonel Taylor is buried in the Presbyterian Church cemetery in Clinton, NJ, along with his nephew, Archibald Taylor, 1st Lt. of Company I who was killed at Salem Church, VA. William Mattison, Surgeon of the 3rd is buried in East Millstone (Somerset Co.) and the assistant Surgeon, Edward Welling, is buried in Pennington (Mercer Co.). The graves of several musicians of the 3rd NJ band and wagoners have also been found.

Anyone seriously interested in helping out with this project or has any leads on where 3rd NJ veterans are buried, please contact Tony Scacifero. (Tony is looking for people to help him in the historical committee who are knowledgeable in research techniques, editor.)

Who knows, there may be someone buried in your hometown. Wouldn’t it be a nice tribute if everyone in the 3rd could adopt a grave and honor these veterans by caring for their final resting place and plant a flag for Memorial Day?