What did the Soldier Think (And Why Did He Fight)? 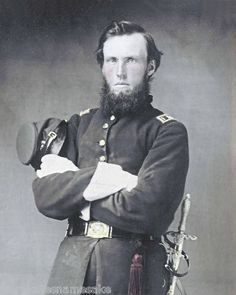 The two factors which most influenced what the individual soldier though and did were his knowledge (and fear) of what others thought of his actions and how long he had been in the service. “What will the folks say at home of us?” molded a soldiers actions. Keep in mind that each company of men usually came from the same town – and a Civil War soldiers were prodigious letter writers. Some soldiers even served as front line reporters for their local newspapers back home. The knowledge that a soldier’s behavior would be reported back home, in the local news, by soldiers returning home who would report news about those still at the front, and letters sent home from the front, and letters sent home from camp made the men “toe the mark”. The men were concerned about their reputations and knew that their battlefield behavior would be reported home.

Letters from home – positive, urging the men to do their duty – were inserted in packages from home and strongly influenced the men. These men reflected the times in which they lived and mirrored a 19th century man’s ideas of courage and what it meant to be a man. However, these viewpoints also changed over time. In the early part of the war, through 1862 and up to mid 1863, courage was equated with manliness and Godliness. Those with faith who trusted in God would survive. Faith gave one courage. To do your duty was to act courageously. To be honorable was to act courageously. An honorable death or an honorable wound was proof that you had done your duty and were courageous. Courage was defined in many ways and was seen as heroic action undertaken without fear for to feel fear was to be a coward. Men demonstrated their courage by “the charge”; by their ability to stand up and “take it” and not to seek cover; or, when wounded, to leave the field under one’s own power, without showing pain and with bravado. The wound was a mark of honor- truly a red badge of courage. Duty caused a man to enlist. His honor caused him to remain in service. And yet, away from the battlefront, the men (in volunteer regiments) were “individuals” and did not readily accept army discipline especially from officers they had known at home unless the officer unjustified and warranted “respect”. Nonbattle discipline was weak. The men were used to trying to get out of routine duties but were willing to fight and follow orders especially if couched in language that appealed their courage.

As the war wore one, their behavior started to change. The men ducked and crouched more readily. They dug rifle pits and trenches and built breastworks seeking shelter whenever possible. Sharpshooting was despised. Trench warfare was strongly disliked and was demoralizing. (“Rats to your holes”) It took a toll on men’s convictions. Beginning in the late mid-war (1863) and certainly by the 4th year of the conflict, men knew that the charge was doomed to fail. Their thoughts turned from courage to survival, but they still needed that courage to make the charge!

Veteran soldiers came to have less and less in common with citizens at home. Some came even to resent them – for staying at home; for not understanding the real war; for clinging to outdated ideas and ideals, e.g., “courage”. Veterans especially disliked peace and advocates (no wonder McClellan lost the soldier’s vote in the 1864 Presidential election!). Combat experience distanced the men from home life. They came to rely more and more on their comrades, their “pards” and their “mess mates”.
How did they remain in the ranks? Discipline, comradeship, and hardening to battle. As more and more of their friends died, the soldiers lost the feeling that he has so far escaped and began to think, “I’m next”. With all of the growing disillusionment, why did so many re-enlist a mid 1863?

It is important to remember that many volunteers joined out of patriotism and to avoid the stigma of the draft. Consequently, they disliked the paid Hireling.

Anyone with battlefield experience knows the value of troop morale in motivating soldiers to carry out their tasks. Morale wavered as a result of a variety of factors: – victory or defeat (especially if the soldier were “sold out” as a result of mismanagement)

– the perception of leadership in the field and in the national government in Washington D.C
– the level of support from the homefront and the impact of the anti-war activities of “Copperheads” The “copperheads’ in Trenton would not permit soldiers in the field to vote*. These Democratic politicians believed that most soldiers were Union republicans. The “copperhead press” printed stories that undercut the war effort just as Republican newspapers printed strong pro-Union articles.

– hardship as a result of shortages in rations, clothing, and bad weather
– how well were things at home and the family the soldiers left behind (this was especially true when the soldier’s pay was erratic and there was nothing the soldier could do to ease the problems facing a mother and her children)

Then, when morale was at an ebb, the soldier was “played out” and had “got the blues”. The age of the soldier was also a factor in morale. The younger soldier (mid 20’s and below) were better able to handle it. The older soldiers, perhaps those with families who knew what they were missing and what they had to lose, were more susceptible to flagging morale.

*In the fall of 1864, the New Jersey Assembly, controlled by Copperhead Democrats, voted not to allow New Jersey troops to vote by absentee ballot in the upcoming 1864 Presidential elections since New Jersey Democrats were firmly behind the former Major General George B. McClellan, the Deomcratic presidential candidate. The legislators (rightly) believed that the soldiers would be loyal to uncle “Abe” and would vote for him. Many New Jersey troops complained loudly that they could not vote. They circulated petitions in camp to go home on a 30 or 60 day furlough to vote. They were upset that folks at home might vote for a man who stated that the South couldn’t be defeated! Many soldiers wanted to charge down the main streets of their hometowns driving the Copperheads before them. They urged their families not to vote for the democratic party candidates, especially “Little Mac” for whom some soldiers said the enemy was giving “three cheers” on his hoped for election as President of the United States.