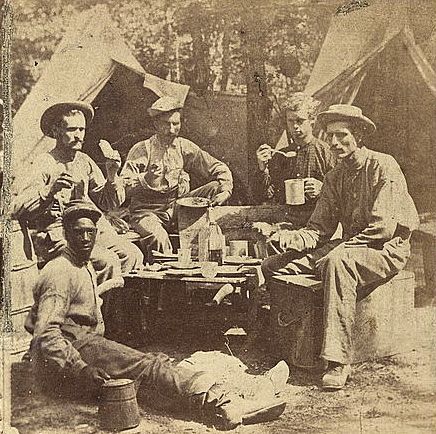 he soldier’s fare is very rough,
The bread is hard, the beef is tough:
If the can stand it, it will be,
Through love of God, a mystery.”

– Wiley, The Life of Billy Yank

Although a spectator will sometimes ask extremely detailed historical questions which have you looking over your shoulder for Ed Bearss or Brian Pohanaka, most of the time you can entertain (and educate) the spectator public by talking about your clothing and something everyone can identify with; FOOD! It is literally true that an army marches on its stomach. How the Civil War soldier managed to march so many miles on what they had to eat is a testament to their beliefs and constitutions.

This was a generous allowance of food. The problem generally encountered by soldiers, especially on campaign, was one of supply and the fact that the quality of the food usually left a lot to be desired. General Hooker introduced improvements when he assumed command in 1863, prescribing that bakeries be established in the camps to supply fresh bread. He also unchoked supply lines to bring the men fruits and vegetables. Still, Army food was, after all, Army food, and the men longed for a break from their daily diet of “hardtack, salt horse, and coffee”- more on that later.

The box of food from home brought joy to the soldier’s heart (and his mess mates if he was in the sharing mood) even if Mother’s cake was a bit moldy. Other food sources included the camp sutler, a purveyor of exotic and costly treats, local residents; and the expedient of the hungry soldier- foraging. Enterprising soldiers would sell part of their rations for money and then buy a delicacy from the sutler.

Let’s dissect the soldier’s typical food staples. First, there was hardtack, or hard bread. 1 ration of “bread: = 10 or 12 pieces of hardtack. The soldiers had many names for this item, including (but limited only by the soldier’s imagination): tooth dullers, worm castles, white oak chips, and bullet stoppers. How many more can you think of? Be creative! Hardtack was nothing more than flour, water, and a generous helping of salt (nominally for flavoring, principally for preserving the bread). This stiff dough was shaped into oversized crackers, baked and left out to air dry before it was packed into boxes and shipped to a depot to await transportation to the seat of war- and it might be a very long time before the box arrived in camp. Zip lock Baggies? If they had ’em, they would have used ’em, and the hard bread was frequently infested with an insect population, weevils and maggots, mostly. Heating the hardtack on a plate, or dropping it into boiling coffee drove the weevils out of the bread, but the maggots wouldn’t budge. What do you call these unwelcome visitors as they crawl out of that piece of hardtack you unwisely popped in your mouth? Meat!

The soldier was equally versatile when it came to naming the kinds of meat they ate. Can you guess what “Sowbelly with the tit on” was? Yes, good old (and in some cases, really old) salt pork. “Salt horse” (pickled beef) was very briny and had to be washed before it could be cooked and eaten. The packers of this product claimed their process would preserve the meat for 2 years. In reality, the meat had usually turned bad by the time it arrived in camp. So called “fresh killed beef” usually had “turned” too. Some wags said it “could walk its self” off the mess plate, and they held a burial detail for the meat! Soldiers guzzled 4 pints of coffee daily. The men preferred individual pots of coffee to “company” pots. Coffee could find its way into the soldier’s cup in many ways, but it was usually black coffee. The longer the period of Army service, the blacker (and stronger) the coffee. “Strong enough to float an iron wedge’ some said. Sometimes, soldiers mixed ground, roasted coffee and sugar in a cloth bag for an “instant” coffee for sale to the government. One product, known as “essence of Coffee” consisted of coffee, sugar, and condensed milk (condensed milk was a creation of the Borden company, which is still in business). It had the consistency of grease and was extremely concentrated.

Other food service innovations included desiccated mixed vegetables (turnips, potatoes), termed “desecrated vegetables” by the men, which came in compressed cakes, were heavily seasoned (pepper) and were used in soup. Beans were another staple food, which could be soaked and used in soup or soaked, flavored with molasses, and baked in a pot buried in hot coals in a hole in the ground. Finally, even in established camps where central commissaries were available, soldiers liked to cook in messes of 4 to 6 men, each taking turns at cooking, or letting the most able of the group do the cooking, while the others would perform the other services for the mess, since the cooking was almost always done over an open fire.

This method of cooking gave over to yet another slang term: “smoked yanks” because that’s what you look like after cooking over the fire! If you are interested in carrying marching rations, the basics (hard tack and slab bacon) are available from the following companies. Hard tack in available from Mechanical Baking Company, P.O. Box 513-I, Pekin, IL 61555. Samples are available for $1.50. 13-24 pieces are sold at 45 cents each plus $4.80 S/H. 25-50 pieces are sold at 40 cents each plus $6.80 S/H. Allow 2-4 weeks for delivery. Slab bacon is available from Tom Muschlitz, Mountain Forge, 1561 Skeet Club Road, High Point, NC 27265 (910) 454-4366. Specialty grocery stores may also carry genuine cured Virginia ham, which also serves the purpose.