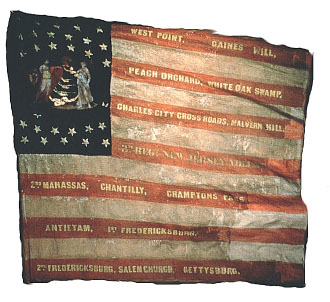 SIR: In accordance with circular issued from your headquarters July 16, 1862, I have the honor to submit the following synopsis of our movements since the action at Gaines’ Mill:

Directly after the battle we returned to camp near Fair Oaks; remained there until the morning of the 28th.

On the night of the 28th marched a distance of 8 miles; halted until morning; took up the march for Savage Station; halted here for breakfast; started in a few hours for Peach Orchard; here encamped for the night.

Left the hill about 10.30 a. m. July 1 and encamped about 3 miles from the hill. In the afternoon broke camp; were ordered to the woods on the left, and there threw up breastworks of logs, prepared to meet the enemy. Midnight again of July 1 took up the line of march for Harrison’s Landing arrived there on the morning of July 2.

About 10.30 a. m. on the morning of the 7th moved from our encampment near the landing to our present position.

I have the honor to be, very respectfully, your obedient servant,