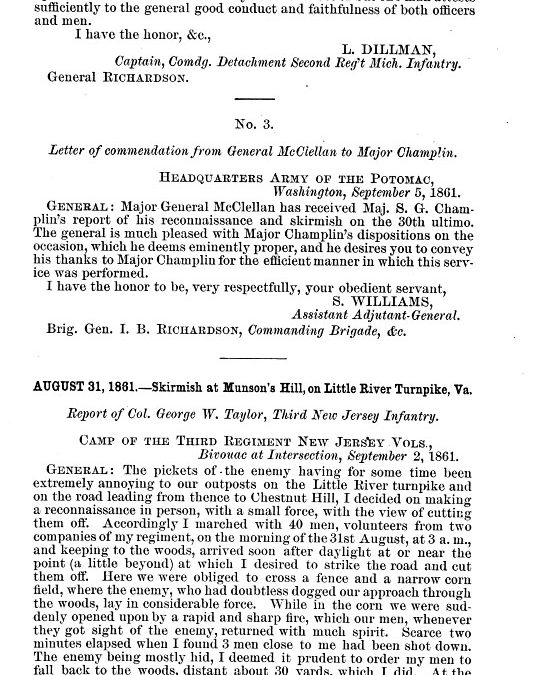 GENERAL: The pickets of -the enemy having for some time been extremely annoying to our outposts on the Little River turnpike and on the road leading from thence to Chestnut Hill, I decided on making a reconnaissance in person, with a small force, with the view of cutting them off. Accordingly I marched with 40 men, volunteers from two companies of my regiment, on the morning of the 31st August, at 3 a.m., and keeping to the woods, arrived soon after daylight at or near the point (a little beyond) at which I desired to strike the road and cut them off. Here we were obliged to cross a fence and a narrow cornfield, where the enemy, who had doubtless dogged our approach through the woods, lay in considerable force. While in the corn we were suddenly opened upon by a rapid and sharp fire, which our men, whenever they got sight of the enemy, returned with much spirit. Scarce two minutes elapsed when I found 3 men close to me had been shot down. The enemy being mostly hid, I deemed it prudent to order my men to fall back to the woods, distant about 30 yards, which I did. At the same time I ordered enough to remain with me to carry off the wounded, but they did not hear or heed my order except two. With these we got all off, as I supposed (the corn being thick), but Corporal Hand, Company J, who, when I turned him over, appeared to be dying. I took his musket, also the musket of one of the wounded, and returned to the woods to rally the men. I regret to say that none of them could be found, nor did I meet them until I reached the blacksmith-shop, three-quarters of a mile distant.

Here I found Captain Regur, Company I, with his command. Re-enforcing him with 25 men of the picket, then in charge of Captain Vickers, Third Regiment New Jersey Volunteers, with the latter he immediately marched back to bring in Corporal Hand and any others still missing. He reports that on reaching the ground he found the enemy in increased force, and did not re-enter the cornfield, in which
I think he was justified.

I should have stated that quite a number of the enemy were in full view in the road when we jumped the fence and charged them, and that each man in the charge, Captain Regur leading by my side, seemed eager to be foremost; nor did one, to my knowledge, flinch from the contest until my order to fall back to the woods, which, unfortunately, they misconstrued into a continuous retreat to our pickets. The enemy seemed to have retreated very soon after as the firing had ceased before I left.

The 3 wounded men are doing well, except 1.* As near as I can ascertain there were 3 of the enemy shot down. The whole affair did not last ten minutes.

The officers with me were Captain Regur, Company I, First Lieutenant Taylor, and Second Lieutenant Spencer, both of the same company.
All of which I have the honor, respectfully, to report.