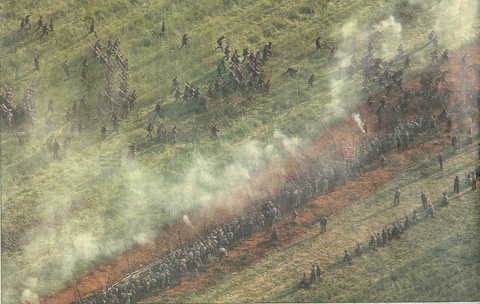 This is a report from Captain, James V. Pepe regarding the reenactment in Spotsylvania, May 7-9.

I arrived at about 9:00 P.M. on Friday at where the battle for Spotsylvania will take place. It was a difficult ride to say the least because of a terrific rain storm and road congestion with wagons of all types all heading south. After arrival I checked in and I managed to get my horses fed as well as myself and decided, after the rains came again, to sleep in the wagon for the night.

The next morning I woke up at 5:40 A.M. and began to run into stragglers from the Regiment. Sergeant Lowcher was the first person I saw then Private Hoffman. I took care of some personal needs changed into a new dry uniform and went to find the Regimental camp. It didn’t take long before I found where the Regiment was bivouacked. Orderly Sergeant Brennan was there along with a lot of the boys and things seemed to be under control. I reported in to Major Buffington and Adjutant Perlotto and afterwards I then set up my dog tent, with the help from Privates DeMetro and Tool and once completed began to greet and talk with the boys.
At 9:45 A.M. there was an Officer and NCO meeting at Regimental Headquarters to discuss the events of the day which lasted about a half an hour. After the meeting a dress parade was conducted and our company was placed as the Color Company (2nd Company) in the Battalion. Then one of the proudest moments occurred when the 3rd New Jersey’s National Colors were presented to the Regiment on the field of battle. The ceremony only took a few moments but the memory will last a life time. First the bugle played “To The Colors” then First Company was broken up into a column of platoons and marched off to retrieve the colors at the Major’s tent. First Company then returned with the color’s between the two platoons, carried by Sergeant Lowcher, faced the Battalion and then the colors were presented. Having 3rd New Jersey’s colors presented on a field of battle was a first and one of the proudest moments I could remember. Jersey Blue pride ran through out my body and I could not help thinking that I wished the rest of the boys were here to see and feel it. Dress parade ended, the arms were stacked and then we took a break. After break assembly was sounded and we marched off to conduct Battalion drill. First Sergeant Brennan gave a resounding speech during the drill to include the history of the 3rd New Jersey at Spotsylvania that would vibrate throughout the Battalion for the entire weekend. When Battalion drill was concluded we were dismissed for lunch. Officer’s call again was sounded and all Officers and NCOs met with the Battalion Commander (Major Scott Buffington) to discuss the upcoming battle and that we will be used as skirmishers (Using the 3rd as skirmishers was historically correct so we were reliving history…….how great is that?). After Officer’s call the Battalion was assembled and we conducted skirmish drill. At the conclusion we took a break until assembly sounded again to form up for our date with destiny.

Assembly was sounded and we marched off to our rally point with heavy marching order (with knapsacks) for the start of the battle where we stacked arms and waited for the word to reassemble and go. The boys relaxed by eating from their haversacks and having conversations about home. After some time the word came to assemble and once completed Sergeant Brennan read a passage from the New Testament. The boys were now ready to face the Rebel foe. We marched to our point of departure where the whole Regiment deployed as skirmishers on the Federal right/Confederate left and afterwards the General in charge of the Brigade complimented us on our deployment.

The battle began with an attack on the Confederate right flank which concluded with a 15 minute artillery duel. Once completed the order for the 3rd Regiment NJVI to move forward in skirmish formation was given. We started out at a walk then moved into the double quick (What a magnificent sight the boys made with lines straight and a quiet resolve) then we were halted and the order to commence firing was given. We traded volleys with the foe, driving in their own skirmishers, then we were ordered to cease firing and move forward and ordered to commence firing once more. Soon another order was given to cease firing and to lie down which allowed the National Regiment, in a column of companies, to pass over us. Another order by our Regimental Commander (Major Scott Buffington) to rise up and assemble the Battalion was given. After the Battalion assembled we marched forward at the quick time and then were ordered to charge the trench works. The Battalion gave a loud “Jersey Blue” and went forward at the double quick. With fire in our eyes and Jersey determination we reached the trench works in a few moments and took possession of the works as the Rebels made a hasty retreat. We then slugged it out with the Rebels at close range. Our casualties were many. The Rebels then counterattacked and drove our supports out of the trench so we had to give way, although reluctantly. We fell back but reformed and traded volleys again with the Rebels, who dared not leave their trenches, until the signal to end the battle. With the Battalion reassembled we marched back to our camp, tired but our heads held high and Jersey Blue pride flowing in our veins. We arrived back at camp to rest, eat and talk of the days events. I could not help but think that it was the grandest of days I had ever experienced.

On Sunday morning reveille was at 3:30 A.M., although early we were ready to meet the foe again. The Battalion assembled and left camp at 4:30 A.M. We reached our point of departure for the attack before the Rebel trenches again and watched for the light of day to arrive. At 6:00 A.M. the attack started. Other Battalions went before us but soon it was our turn. Major Buffington gave the order and we marched off at the quick time. With mini balls buzzing all around us like angry bees we kept a steady pace until the order to double quick was given. We obeyed the order with a steadfast determination and knowing that today the sons of New Jersey will again make mother state proud. Our line was together and we ran and ran and it seemed like an eternity but we finally made it to the trenches and again took them. The Rebels ran as fast as they could out of the trenches only to reform and begin the slugfest. After a short while we climbed out of the trenches, moved forward for a short distance and traded volleys but had to make a hasty retreat due to our supports giving way. We reassembled some distance from the trenches and the volleys of death began again. The 3rd New Jersey had many casualties and none were greater than in the second company. Eventually with the loss of so many of the boys and our resistance not amounting to much we left the field. The battle was then ended.

The Battalion was reassembled and we marched off to camp. About half way there General Heim stopped us and congratulated us on a job well done and how very proud of us he was. We responded by a resounding cheer of “Jersey Blue”. We then continued our march to camp where we were halted and Major Buffington thanked all of us. I asked for permission to speak to the Battalion and thanked them again for portraying the 3rd New Jersey and that the last “Jersey Blue” we gave did it for me. Well, with that said Major Buffington had them give one more “Jersey Blue”. It was an event to remember.